One of the things I hear a lot, particularly from adults is, "I have NO musical ability" or "I tried learning once and was so bad at it". It breaks my heart to hear how many people are convinced they don't have the ability or talent to take part in something that could give them so much joy! In fact many of the adult students I've worked with who have been apologetic about how 'bad' they are, actually end up being quite good! You are never too old to start and there is no such thing as 'no talent' for music. Everyone has strengths and opportunities for improvement, but it's the teacher's job to focus on both and help you get the most out of your lessons. If you have ever felt like you weren't getting the momentum you wanted from lessons, it's probably because your teacher has failed you. I understand that everyone is unique and I am dedicated to bringing out the best of your abilities in order to help you achieve your musical goals!

Have you ever had a piece that you wish you were able to perform? Has the idea of caroling around a piano at Christmas enchanted you? Do you love ragtime and wish you could sit down and jam out to Scott Joplin? Well, you can! There are so many different styles of music to enjoy. It's important to find time for the things that make us happy and if you think learning music could be one of those things then there's no better time than the present to start!

I've been singing since I was able to talk and have pretty much never stopped. I am always singing or humming around the house, at work, while shopping, you name it. My more formal experience singing, however, started when I was 9 years old. I joined the Peabody Children's Choir at the Peabody Conservatory right here in Baltimore! I participated in that for a year until my family moved to Canberra, Australia. Performing art is greatly supported there, and as such I was welcomed into a variety of musical communities. My greatest endeavor, though, was joining the Woden Valley Youth Choir, Australia's National Choir, in which I participated for 3 years. During that time I gained experience performing in nationally televised concerts and commercials, in venues such as Canberra's national Parliament House and The Sydney Opera House, and with renowned performers such as Nana Mousokuri and The Wiggles! I was also given the great honor of performing for figures such as John Howard, the prime minister of Australia, and Nelson Mandela.

In addition to taking classical voice lessons in college, I participated in the University of Hawaii's Chamber Singers where I had the pleasure of performing with the Honolulu Symphony Orchestra alongside talented artists such as Quin Kelsey and Sumi Jo.

Through a lifetime of singing I have gained a solid understanding of the voice as an instrument and am able to work with students and help them understand proper techniques for using their voice.

Hi There! I'd like to share with you a little bit about myself. My name is Taryn Biancaniello and I'm from... well, everywhere. Being part of family fond of adventure I've been blessed with the opportunity to grow up around the world including places like Germany, Australia, Hawaii, and somehow I finally ended up in Baltimore! But one of the things I love about this city is the great sense of appreciation for art and music, so what better place to build a music studio than right here!

Ever since I was very young my love for music has been incredibly strong. Instead of choosing to watch cartoons, my siblings and I would enjoy classics like The Music Man, Sound of Music, Joseph and the Amazing Technicolor Dreamcoat, and the list goes on. A little nerdy, I know, but who cares, we loved it! I could also never seem to get my hands on enough instruments growing up. I had a habit of picking up anything around me that could make noise and within a few minutes figuring out to play at least 2 or 3 different melodies on it. Each one was like a puzzle that I was fascinated with solving. In my time I've dabbled in violin, cello, guitar, flute, harmonica, hammered dulcimer, voice and piano. By the time I was in high school there was no question about my career path, it HAD to involve music. I decided to focus on piano and in 2011 obtained my Bachelor of Music degree in Piano Performance.

I have since moved to Baltimore where I have resided for the past 6 years and continue to teach and share my love of music with others. 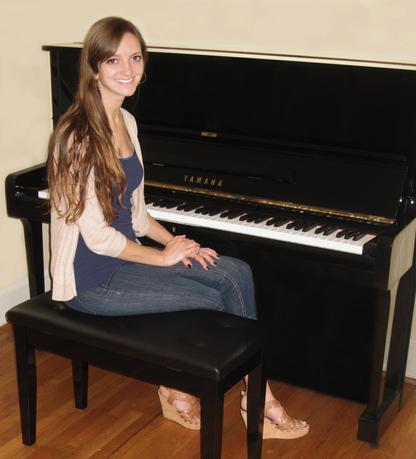 My first love and primary instrument! I have been playing since the age of 8 and while some may consider that a late start, I believe I began with a bit of a bang! For a few months I had tinkered around on our fixer-upper piano at home, eager to take lessons but told I needed to wait (to avoid any *friendly* competition with my older sister who had just begun). Then at my sister's piano recital, I made my way to the keys during the reception. Her teacher walked in the room to find me standing at the piano, playing Mary Had A Little Lamb with my hands behind my back. He decided it was finally a good time for me start and I have been playing ever since! Although I have experimented with many other instruments, I spent the most time and attention on the piano during my childhood and adolescence. Given this, it seemed only natural that when it came to choosing a degree in music, piano would be the instrument I focused on.

I proceeded to get my Bachelor of Music degree in Piano Performance. I mainly studied classical music during that time and had several opportunities to perform in large and small ensembles as well as individually. During my college career I worked consistently to advance my technique and performance quality. Before graduating I performed two public, solo concerts where I played the works of composers such as Beethoven, Chopin, Mozart, Shostakovich, and Rachmaninoff.

I believe the skills I have acquired on the piano allow me excel in teaching, not only a fundamental understanding of music and how to use the instrument, but an advanced skill set and a true artistry in playing. 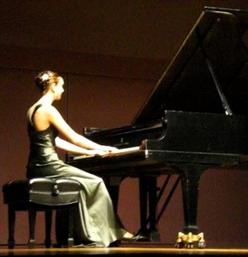